Terry was Toastmaster of the evening choosing the uplifting theme of birthdays for the meeting. Proceedings included birthday poppers, hats and a rendition of happy birthday to amplify the theme.

A team helped assist Terry in the running of the meeting; Joyce was timekeeper, Cleo was Harkmaster, Eleanor G was Sergeant at Arms, and Nuala was Grammarian selecting the word of “Merriment” to coincide with Terry’s theme. 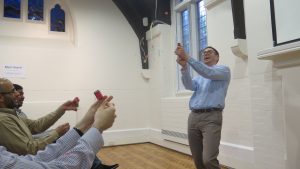 Toastmaster Terry with a party popper

The first speaker to take the stage was Eleanor B. Her speech summarized four art pieces signifying specific movements that she felt contributed to the evolution of Western art, including visual examples from cave men, Degas, Turner, and Da Vinci.

Stephen was the second speaker and his humorous speech describing the struggles he overcame in purchasing a bike and his ambitious plan to cycle from London to Brighton. 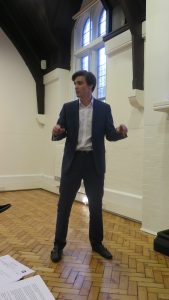 Annabel was third, a speech describing her three favourite alcoholic beverages, intertwining both Chinese and Scottish cultures surrounding social drinking, ending her speech with a quote from Churchill “I’ve taken more out of alcohol than alcohol has taken out of me”.

Founding club President Florian completed his Advanced Communication Gold on Tuesday. His educational speech involved visual aids and background research demonstrating an in-depth knowledge regarding potential reasons why Britain’s economy is weaker than it should be. 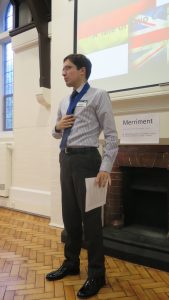 Join us next week for more speeches and evaluations. We will also be having our Annual General Meeting during the second half where we will be electing our committee, reviewing our successes and planning the future of the club. Everyone welcome!