On Tuesday we had the pleasure of hosting Mohammed Qahtani the 2015 World champion of public speaking. The workshop was split into two parts, the first part entitled “Conquer adversity and live up to your dreams”, The second section of the workshop was entitled “Inject more humour into your speeches”. Mohammed delivered a very dynamic, humorous and energetic workshop with Q&A sessions after each section. 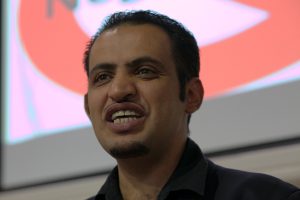 Our guest of honour Mohammed Qahtani

Mohammed began the first section of the workshop by stating that in order to achieve your dreams the word “impossible” should not exist in your vocabulary. To effectively achieve your dreams successfully, he broke down the challenge of achieving your dream into a number of steps and listed adversities that you may encounter. For each item, he also included a fact or anecdote as an example.

Mohammed explained to the audience the need to have specific goals, and included the advice that goals should not be superficial; ideally they should have a higher or noble cause. Once you have identified your dreams, Mohammed provided advice in facing limiting fears by using facts to dispel worry. He cited that often what we fear is irrational. Using the common fear of snakes as an example, Mohammed stated that “16% of snakes are poisonous, 40% have fangs than can bite, 2% have poison that can kill humans and often snakes only bite when they are being attacked.” Therefore like many fears, the fear of snakes is, in some ways irrational. 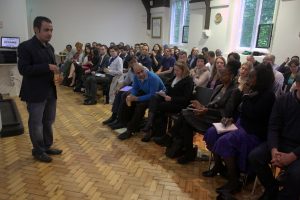 Mohammed’s workshop offered practical advice that he finds effective in controlling fear. He demonstrated this in an exercise with the audience, asking participants to breathe deep into the belly to get the benefits inhaling and exhaling slowly, to calm nerves.

Mohammed added a humorous element by demonstrating to the audience how to become more self aware. He did this by utilising Nadia a member of the audience, to throw rolled up paper balls at him if he said anything negative during the proceedings. This added comedy value throughout his workshop and highlighted to the audience that we should have more self awareness and approach life in a more positive manner.

In summary of the workshop in dealing with adversity and living up to your dreams, Mohammed urged the audience not to live an ordinary life. He went on to end the section with the statement “Don’t just exist, live” explaining that he has a bucket list and every year he adds 5 things to this list to complete before he dies. Mohammed told the audience that he reminds himself of this bucket list daily, continually adding and stroking off goals once completed.

Packed room for this special event!

The second section of the workshop began with Mohammed explaining the reasons why humour is important in order to catch the audience’s attention, maintain audience engagement, and how humour can often help in delivering an important message. He spoke about his basic rules of comedy, different types of humour, and the benefits and pitfalls of each. He then demonstrated his skills with a very humourous prepared speech in which he recounted an aeroplane journey where he changed his seat multiple times and encountered new issues each time, intertwining a message at the end; that we should take control of our lives and actively change our circumstances if we are unhappy.

Thanking our guest and the audience for an amazing event! 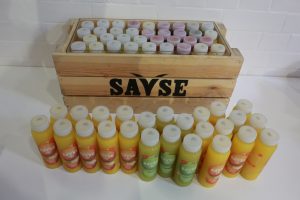 Amazing refreshments for the break were kindly provided by Savse Smoothies.

We would like to thanks to Savse for the smoothies and Warren Sheng for the photographs!