Another interesting and exciting Toastmasters meeting at our great club near London Victoria was held on Tuesday 27th of June 2017.

Our president Terry kicked off, reminding everyone that this was the last meeting of the Toastmasters year and therefore his last meeting as president. From next week our incoming president Nuala will take the reins.

He also reminded everyone how the fear of public speaking is linked to the fear of rejection and by practicing the former, he has helped reduce the later which helps with his job as a sales person.

This evenings Toastmasters was Christophe, who has been caught up with other commitments for the last few months and reminded everyone that because of the nerves he felt carrying out the role this week, it’s important to stay well practiced at the skill of public speaking to help keep these nerves at bay. 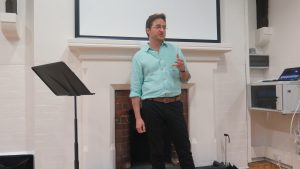 Christophe – Toastmaster of the Meeting

Our first speech was from Nuala and it was an educational about the importance of the evaluations that take place for everyone who takes part in club meetings.

Her educational was really well structured and offered a mass of great information on how to enhance these evaluations to give positive, motivational and educational feedback to speakers within the 3 minutes we have to do so.

Our second speech was about the people power involved in political elections. For a subject that could be a little deep, our speaker Karen gave a text book example of how to present a technical subject in an amenable way for any audience.

This speech was littered with audience engagement, humour, great visual aids and the speakers own passion. Combined with hitting the objectives of this Project 8 Speech from the Competent Communicator manual, which is to have fully researched your topic and provide evidence of such in the way of relaying facts, Karen’s speech gave the audience real food for thought about the power of their vote.

The evening’s third speech was the eventual winner of the nights Best Speaker ribbon. Annabel gave us a speech from an advanced manual called The Entertaining Speaker.

Entertaining it was indeed, the topic of online dating made for a humorous speech which engaged the audience and caused many a chuckle from them. 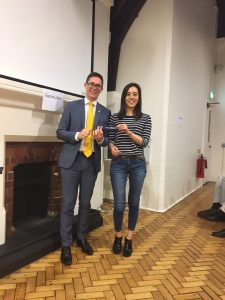 As always, each of the 3 speeches received a personalised Evaluation. Our evaluators were Terry, Negin & Dan who all made an incredible job of giving motivating and detailed analysis of each speech.

After a break for tea, coffee and chatting we had our impromptu speech practice session called Table Topics. One of the clubs VPE’s, Alex, led the session with topics that challenged the speakers to persuade famous cartoon characters to take abstract courses of action. 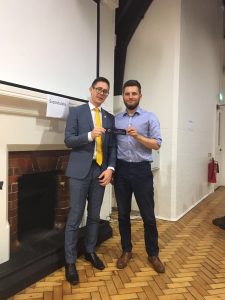 As abstract as they were, members and guests alike took the topics in true Toastmasters fashion and delivered their 1-2 minute unprepared speeches with style.

Each table topic speaker was evaluated in style by Fahad, who had at least 1 commendation and recommendation for improvement for each of the speakers to learn for the next topic. 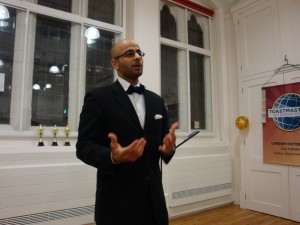 Toastmasters meetings can’t run effectively without functionaries. Our timekeeper, Florian, kept efficient track of the meetings time and livened up the role with a theme of time travel.

Our grammarian Nick did an amazing job of listening and recalling some great uses of the English language, as well as pointing out the number of filler words used in the meeting and how these um’s and ah’s can detract from our credibility as speakers.

Then our Harkmaster Matt tested our listening skills with some questions about what had been said throughout the whole meeting.

We are grateful to our general evaluator Kim, she tidied up the meeting by evaluating all those not evaluated till then. She also gave some great comments on how good the club and the meetings was, with a few pointers for the future.

Whether you are a meeting participant, audience member or guest, you will have left this meeting having learnt something and with a smile on your face….. If you weren’t there, make sure you come next week so not to miss out.

Click here for our location in London’s Westminster Area