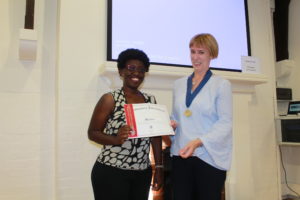 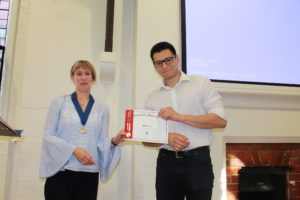 Eleanor took charge not only of the meeting, but also of the whole club as she launches into a year of club President for 2018-2019. The torch is handed down from a lady to a lady, now how is that for girl power? Eleanor started by saying that her journey began, some time ago, with walking up to the stage and? Freeze. We are told that improving yourself means you need a team like that of the team crossing the antarctic. She told of the eagerness to climb a summit of becoming a Competent Communicator, which Eleanor achieved only to look up to the next summit of becoming a great storyteller, moving in leadership roles as Vice President Education to President, the only way is up. Now since we are living currently World Cup football, Eleanor reminded us that we can always become world class Toastmasters. 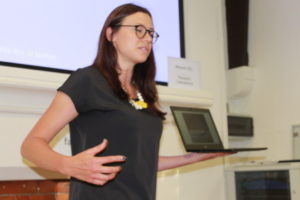 Paulina Dabrowska with speech The shadows of perfection

Motsabi managed our time being the time keeper, she spoke of her focus on two goals; to keep us all on time and to support the speakers with green cards, not American Green cards, yellow cards, well not a warning from a football referee, and a red card which is definitely comes from a football referee as the speaker will be sent off if they crossed their time limits. 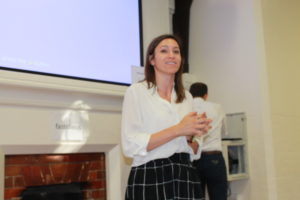 Our Toastmaster for the night toasted us by starting with “I think there is some sort of a match tonight” Yes Vahagn it is English verses Colombia, but he supported Croatia because he like to support aspiring teams and nations, great choice as Croatia will be playing Russia the host nation in where? The quarter finals, WOW ! How did he do? He managed all the meeting with confidence, smiles, plenty of clapping and made is forget there was a game on, well done Vahagn, keep the energy up.

Grammar was managed by Arsen, a recent addition to the club, but he spares no time in climbing up that summit of public speaking, so Arsen challenged us to use great grammar in our speeches, to avoid filler words because he will count them and he described himself as to be for the night a Doctor of Language, and selected word of the day to be “fastidious” to mean someone who has eye for details, nit picking almost with a magnifying glass looking for beautiful language use. 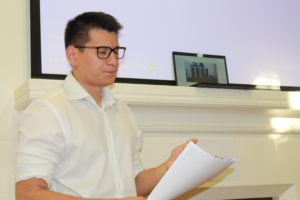 Harkmaster Georgie with a big smile and a box of chocolate walked up to the stage and encouraged all to listen carefully to what is being said. Hark is an old English word to mean attentive listening, she created a great list of questions to test our listening, but guess what? Those chocolates were flying 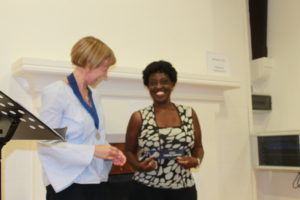 into the laps of many attendants.

I walked up to the stage to speak of my role as a Meeting Reporter; taking notes and then writing this blog for you to read and enjoy, hopefully I would convey the growth, energy and fun inside our room to the outside world so when you read this blog post, the only thing that comes to your mind, “I want to go see these people next Tuesday” I see you nodding, so come along and practice your public speaking, in fact invite your friends too, and I would be happy if you shared this blog over social media with your personal touches, go on. 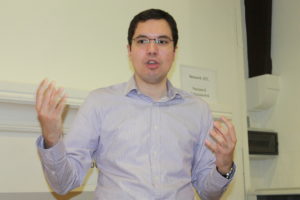 Paulina spoke of “The shadows of perfection”, she exhibited an image of a man walking, with a shadow reflection. She took the audience into the picture, to look at certain parts and what they projected, the feelings, the emotions and the lessons, as an example she drew our attention to the connotation that the shadow of the man looking ahead of him gives impression of the future one looks up to. “I would like to share 3 tips” she says in order to manage our development; Position visualizations for your outcome, Habit swap, and make it social. Habit swap is changing an disempowering habit like smoking or eating sugar to empowering habits like healthy eating and exercising. Telling friends and family about your change plans will help you become accountable to the goals you set. Paulina declares that if you tell your social circles about your intended goals there is a 65% chance of completion, and “Don’t chase the shadows” she concluded. 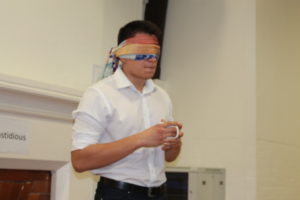 A mug with Eduard Kim to speak about 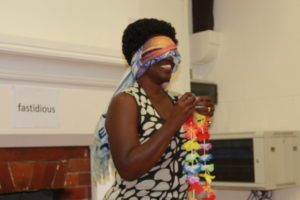 Faith Wilkinson talking about a necklace of flowers

With a speech entitled “Blockchain 101” Eduardo started by saying “A paper on bitcoin was published that launched market interest”. He made us wonder who started this phenomena teasing our thoughts but concluded that it is actually unknown for certain who started the whole thing, so it remains a mystery to this day. He used a graph of bitcoin market over 24 months where it soared and plummeted, and at times growth hit 1000%. He touched on the importance of technology for trading these days, and how easy is it to buy and sell. He compared the idea of Blockchain technology to that of Wikipedia where many participants work remotely to produce an article collaboratively. He concluded by exploring the benefits of using blockchain technology for bitcoin trading as; Makes trust more achievable as no one part own everything, none can change all records,removes the need for third party interference, and it is actually open source to all.

What went right, and not so 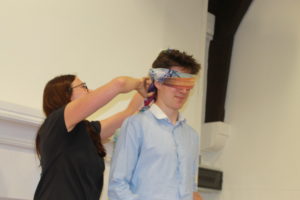 Blindfolding underway before handing over the prop

Eleanor went on stage to evaluate the speech of Paulina, she pointed out how good was the metaphor for time and the tips offered for not chasing shadows. Eleanor flagged the power of 3 used in the speech during offering tips. She commented “I wanted to hear more introduction about the artist Alberto Giacometti and perhaps more personal story from Paulina so that we can feel her message”, off course an encouragement to use the stage more to empower message and we all benefit from a good conclusion.

Andy evaluated the speech of Eduard Kim stating right at the beginning that he was going to focus on 3 aspects of evaluating the speech; research, stage movements and words used. It is really a smart way of structuring ones evaluation to help the speaker improve on vital skills that the evaluator thinks important. Andy described the speech as being “fastidious” with details and when one speaks of technical issues, Andy recommended to “Let out the inner nerd”. Also Andy wanted more drama added to the point when there was a discussion of who is behind blockchain? More drama, more engagement he noted. Concluding with some advice on use of words, “Use clear language, make sentences shorter for maximum impact”, excellent advice.

Hello guests, we are humans!

Jackie Gallego welcomed guests being Sergeant at Arms, with her smile, entertainment, and assuring words of how fascinating when we start something news, she linked this vibe to the choice guests made in visiting us tonight, in fact congratulating guests for attending labelling it the first step into public speaking “You took a great step to be a speaker” I totally agree, well done Jackie for awesome guest welcoming energy.

Paulina mounted the stage again, this time as a Table Topics Master, where impromptu speeches are delivered. She spoke of her recent visit to a museum, and how amazed she was with all different sorts of tools and gadgets, hence she decided to invite to the stage speakers that would be blindfolded and asked to describe what an objects placed in their hands and how would they uses them, very interesting innovative way. Off course some participants felt great speaking blind folded as they were not seeing the audience, some wondered in their imaginations,, and some found it weird to talk to those who you can’t see. The props varied from a pen, a mug, a necklace of flowers, bells, fridge magnet,

Florian was destined to be the General Evaluator who is tasked with looking at the whole session and give feedback on what went well and what could improve, he spoke of the President who would do well with more energy at the beginning of the meeting, and using the gavel as “Wood on wood makes maximum impact for drawing attention, hence the use in courts of justice”, he pointed out to avoid hand clasp as much as possible and perhaps put at asides as an alternative. The toastmaster was organised with a sheet of on the responses to the theme question of the evening which was “In the World Cup of Football, what team would you see win and why?”. Florian commended the display of time cards by the Timekeeper, and recommended to deliver a mini speech about time as the role is being introduced. The grammarian was good in noting the word of the day was used 6 times, counted the filler words to be over 20 by some people, and Florian recommended to the grammarian to also try to focus on the se of language, beautiful and otherwise. Florian thought the Harkmaster did a great job constructing short questions that attracted many responses and he recommended to “Flesh out the explanation of the rewards for listeners”

Roles of the meeting 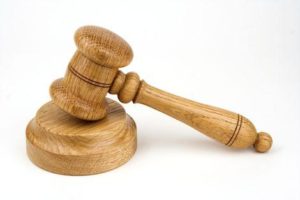 Use the gavel on wood

Florian commented also on Meeting Reporter to “mention that meeting reports are actually a documented history of the club” On .Sergeant at Arms role may be scary at the stat, but well worth it to make guests feel relaxed and perhaps join. Florian advised “Try to be snappier, and let the applause for the whole group of guests be at the end”. For the Table Topics Master, Florian liked the new twist of blind folding, and recommended that the role is explained and what each speaker needs to do clearly.

Table Topics Evaluator was focused and analytical, Florian noted that perhaps using less words to evaluate may help going through 8 mini speeches of impromptu style. For first evaluator Eleanor the commendation was she used what, why, when structure in evaluating the great side of the speech. For Andy evaluating the send speech, Florian commended not using notes, but a good evaluation structure, Florian liked to see one recommendation for each of the 3 points the evaluator set out to evaluate.

Awards you can get

Best Table Topics award won by Faith for her story of a necklace given to her on Christmas while being in a refugee camp in Africa, that necklace meant a lot since it had emotions, memories and struggle connected to it, very moving.