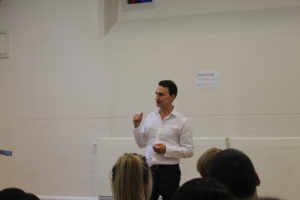 Eleanor our President started the meeting with a story of a legend called Michael Jordan, this is an american legend who focused on developing his skills in basketball that he attracted the lime lights from the whole world to shine on him. He invested his fame in sport to create business worth today 1 billion dollars. Eleanor spoke of how “Talents wins games just like we have in Toastmasters, we have goals”. The inspiration was when members develop individually, the club develops collectively. With a call to action “Tell us when you develop! Get up here on stage! 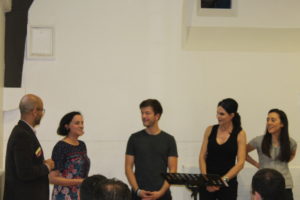 Volunteer to lead meetings as a Toastmaster! So you too can run the show!”

Robert being pumped by now was strolling to take over the rein mounting the stage and kicking off. He asked us where did we want to go next on holiday, off course some places were real, some were only real in our minds.

Paulina rode along as the Grammarian watching for beautiful language use “It is about connecting better with clarity and creating impact”, to this “I want you all to use the word of the day MAGNITUDE !”. Avoid filler words guys “Because I will be counting them all”. Filler words include emmm, so, errr, ahh.

The Harkmaster Mayur spoke of how important it is to listen. And to entice us he declared “If you want chocolate, listen carefully”, this is a very tough call to combat against so silence descended upon the room ready for the speeches.

Boyko launched the speaking fever with “Challenges”. Interaction with the audience from the start with questions like, What do you do when you are faced with a challenge? We listened to how a boy 12 years ago began his first challenge in studies. We are told to “Face it”. Boyko used vocal variety to act scenes of his story, this included how learning Salsa also was seen as a challenge. One should try even if they suck at the start. 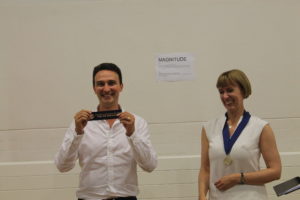 Arsen told us of how the company Apple founded by Steve Jobs had a budget ot 1 trillion dollars, to put that in perspective, he compared it to the budgets of countries like the Netherlands just to appreciate the size Apple as a company. Aresn drew our attention that “Digital companies are transforming our lives” and with examples of Uber, AirBNB and Amazon we learned that Uber doesn’t own a taxi, AirBNB doesn’t own a room, and Amazon doesn’t own stock, yet they are all digital successes. Bill Gates was quoted to have said “640KB ought to be enough for anybody”, well that was back in 1981. 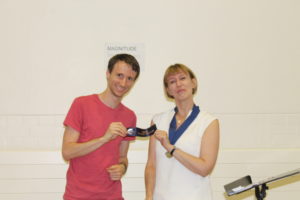 Yumi questioned the audience about what do they consider doing in public to be embarrassing? Do you eat? Do you blow your nose? What do you find embarrassing? In Japan “We bow to greet, and we bow three times, we go lower in bowing in the 3rd time”. When exchanging business cards “We use both hands”. The Japanese culture is exposed to us via speaking of how each one is “expected to carry their own hankachy” Aha you read it right because “Handkerchief” is shortened to “Hankachy” as the “Japanese are efficient”.  Yumi pleasantly demonstrated how in public the Japanese blow their noses, sniff and slurp. In toilets the Japanese provide flushing sounds in toilets to mask off the sounds produced “as you did your business” as a form of polite gesture, however this was not demonstrated during the speech for lack of equipment. 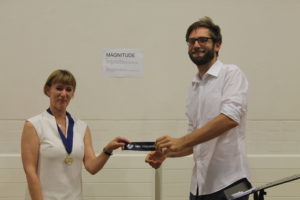 Dana took stage to evaluate the first speech “Challenges”, he praised Boyko for the clarity of voice and for vocal variety used during delivery, how Dana spoke of his choice of dressing up in the Kurdish traditional dress due to celebrating Eid Al-Adha which is the Muslim’s festival for completing Hajj in Mecca. The pilgrims celebrate in Saudi Arabia while we here also pray, entertain and dress up for the occasion. Dana expressed his appreciate for the speech structure, the meaningful eye contact and the confidence displayed by Boyko. Dana also recommended that Boyko use more vocal variety, utilise the stage more to deliver the story and to engage the audience by asking questions at the beginning.

Anna followed by evaluating the second speech “New reality – Digital Revolution” delivered by Arsen. She pointed out to the good start of the speech as it began with “Something we know well; the company Apple”. To make figures understandable, she praised the use of “Comparing the GDP of the Netherlands as a country to the revenue Apple generates”. We are told how Arsen “Hammered home digital supremacy” of some companies via audience interactions and multiple examples. Anna recommended points to improve; perhaps “Using more pauses to let us absorb the points”. also , working on the structure would definitely aid Arsen in having a better speech next time so that “We connect well the statement of Bill Gates to the Industrial Revolution to the Digital Revolution”. 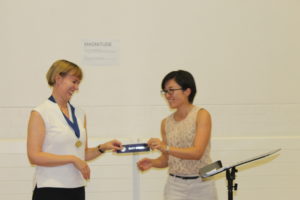 Matthew with a towering stance took stage with a big smile to evaluate the third speech “Japanese Etiquette” delivered for the second time as required by the programme Pathways. This is so that feedback obtained from the first delivery of the speech is taken seriously and integrated to a second version of the speech. Matthew liked the purposeful and kind eye contact as Yumi “Looked individually to members of the audience”. Despite recognizing that Yumi glanced at notes at time, she project a good flow of content. Also, Matthew noticed vocal variety of voice and tone going up and down during speech and recommended use of dialog. He recommended raising the volume a bit and construct a stronger conclusion.

Fahad, being the Sergeant At Arms decided to give all guests stage time collectively as he invited all visiting guests. He called it “Stage Ville”,I guess next he will have his own game on mobile apps. We listened to how each guest introduced themselves, told us why they decided to visit and we all applauded all these wonderful commitments and aspirations. At London Victorians we just love seeing guests come see us in action, we would love them even more when they join us to be great speakers, so come along and invite your friends to an Tuesday evening of learning and entertainment.

Jackie was the Master in charge of Table Topics where you can take the stage and speak for maximum of 2 minutes on a topic given to you on the spot. This time Jackie asked participants to imagine they are book authors introducing their newly written books which covered various topics and title through the imaginations of speakers such as “Eyes Wide Shut”, “My Cooing Secrets”, “24 Hours in London”, “A Brief History of My Country” and “Why Facebook Will Kill Us”.

The Toastmaster Robert was now ready to handover the meeting to the President Eleanor who lead the applause for a job well done by Robert. Now it was time for awards and photos, so on the sound of drum rolls the Best Table Topics Award went to Alex, the Best Evaluator went to Matthew and the Best Speaker went to Yumi, Hooray !.

Now! How many skills can you pick up from one meeting? Plenty, it depends how you listen and modal great strategies of speakers. It is fine to aspire to be a public speaker, but when you stand up and speak, that’s where you really can say you are a public speaker. Have you pondered for a week? A month or even a year on what would really be like standing in front of colleagues, family or bigger masses and deliver an inspirational speech? Is it time you walked into London Victorians to start? Make sure you block Tuesday to come visit us.